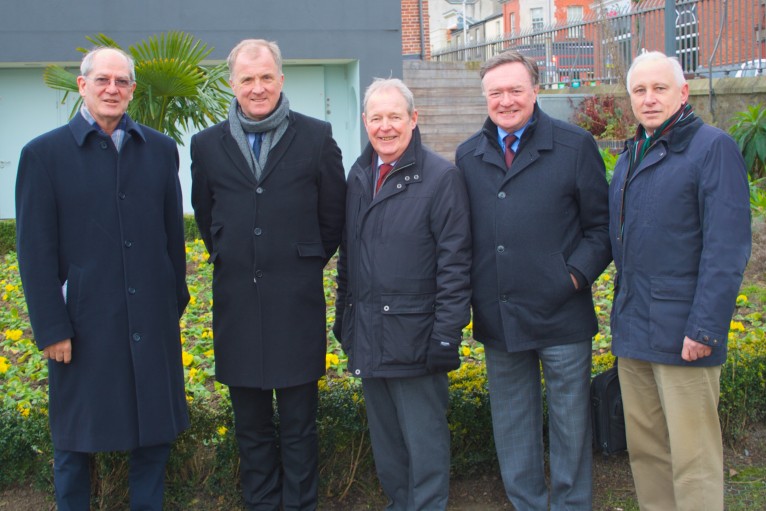 The Rugby World Cup was inaugurated in 1987 when it was hosted by New Zealand The Tournament is played every four years. The winners are awarded the Webb Ellis Cup in memory of Rev William Webb Ellis (1806-1872) who invented the game at Rugby Public School Warwickshire – the school that Shane Ross attended.

The Ireland Bid was announced in November 2014 and supported by the Government and the Northern Ireland Executive.

Hugo was also a member of the cross-border Bid Team assembled by the IRFU that included Dick Spring, PáraIc Duffy Director-General of the GAA and Brian O’Driscoll. Regrettably, when the outcome of the bid was disclosed by World Rugby last November, France emerged as host in 2023 for the second time in the history of the Tournament.

Hugo brought impeccable credentials to his role in the bidding process. He was a member of the Blackrock College team that won the Leinster Schools Rugby Senior Cup in 1977. He subsequently played for Trinity College, Oxford University and London Irish before being capped for Ireland 37 times between 1981 and 1988.

He played for Ireland in in the inaugural Rugby World Cup in 1987 and scored four tries in four games. He played for the French Barbarians in 1989. When his playing days concluded he was a pundit on BBC Radio Five Live for many years during the Six Nations Championship and, more recently, on TV3.

Hugo has had a stellar career in business; initially with Boston Consulting Group but for the past 30 years he has had a range of roles with Goldman Sachs and is now Managing Director of Goldman Sachs Investment Banking in Ireland.

Outside business Hugo was active for 20 years in the leadership of the Ireland Funds in this country and the UK. He is Chairman of the British-Irish Association, an initiative founded in 1972 by TK Whitaker, Garret FitzGerald, Thomas Pakenham and others with the aim of improving the relationship between Ireland and Great Britain and the North and Republic.

Hugo is also the bearer of a distinguished heritage that traces its origin to the small coastal village of Glenarm in the Glens of Antrim.

His great-granduncle, Eóin MacNeill (1867-1945), established the Irish Volunteers in 1913 and served as its Chief-of-Staff. Eóin was Ceann Comhairle of Dáil Éireann from August 1921 to September 1922 - during the negotiation and vote on the Treaty. He was elected TD to represent NUI from 1918 to 1923 and Clare from 1923 to 1927. Eóin MacNeill was also an MP representing the constituency of Londonderry in the Northern Ireland House of Commons from 1921 to 1925.

Hugo’s other great-granduncle was James MacNeill (1869-1938), a brother of Eóin. He began his career with the Indian Civil Service; was not involved in the Rising but and after returning to Ireland was jailed. Following his release, he served as Chairman of Dublin County Council. He was appointed by the Provisional Government to be Chairman of the Committee that drafted the Constitution of the Irish Free State in 1922.

He was appointed the first High Commissioner to the United Kingdom in 1923. He became the second Governor-General of Ireland in 1927 and served in this role until 1932.

Letters in the National Library illustrate that James MacNeill and his wife Josephine (1895-1969) enjoyed a convivial relationship with many prominent personalities of their era including Yeats, Lady Gregory, George Bernard Shaw, Micheál MacLiammóir, Hilton Edwards, Sir Shane Leslie and other luminaries.

In 1950, Josephine MacNeill, by then the widow of James, became Ireland’s first female head of a diplomatic mission when she was appointed Ambassador to The Netherlands. During the remainder of her career until 1960 she served as Head of Mission in Switzerland, Austria and Sweden.